I've been around guns my whole life, not intimately, but "around."  I shot .22 rifles in Boy Scouts at summer camp, and learned about shotguns when my brother got interested.  I learned to shoot trap, a clay shooting game, with my brother and Dad in my late teens, and in my early twenties I shot rounds of trap regularly.  At one point, I was reloading shotgun shells for the whole family, and shooting trap with friends and family several times a week.  I've shot the State shoot, and attended the Grand National several times to watch friends shoot.  I also like to hunt birds, and do so when I can.  It's safe to say that I'm very comfortable around 12-gauge shotguns.  Frankly, the only reason I've slowed down and shoot less trap and fewer ducks now, is I enjoy spending time with my young family, more than those hobbies.

In the past 5 years, I've been around shooting sports less, and the volume of the gun debate has increased significantly.  I, of course, support the ability of people to hunt and shoot clays, because that's what I like to do.  I think that a healthy respect for, and access to, the tools to do so has value.  I'm nervous about restricting guns to the point that they become taboo in society.  However, I've also been uncomfortable with the fervor around weapons that are overtly militaristic and aggressive in nature, but not been able to articulate my thoughts on those types of guns.  Yesterday, my local gun club and dealer helped firm up my own position on these "black" weapons.

This gun confused me at first.  It's not a high-powered rifle, but a shotgun.  It doesn't look like the shotguns I'm familiar with though: no walnut stock, graceful lines, or long barrel to point at a target.  It's not polished and finely checkered, nor is it a woodsy camo that blends into my hunting coat and the landscape in the marsh.  This shotgun is a tool for killing people.  Its short barrel and "Law Enforcement Buckshot" are meant to indiscriminately fire a shower of killing force in a broad, forward-facing direction.  Using it inside your home would be only slightly safer than tossing a grenade down the hallway at an intruder, while your children sleep in their rooms.  This particular gun takes no skill to learn to use.  There are three uses I can think of for this type of weapon:  killing people, practicing killing people, and simulating killing people.  This gun is not an isolated example either.  Scrolling through their social media pages, and those of other local dealers, these are the guns that are featured, talked about, and shared.  Rare is the post about the new shotgun or rifle that has hunting or sporting as its use.  People-killing guns get the "oohs" and "ahhs."

I'm not a politician, I'm not an activist, and I'm not in the firearms industry.  My opinion on the issue does little to influence it.  However, from now on, my position for my own self is clear.  The gun industry, lobby, groups, clubs, and dealers have pushed the issue too far.  I don't want to own guns that have no value but to kill people.  I don't care for my neighbor to, or even my friends.  If they would choose to do so solemly and with great hesitation, I could stomach it.  Celebrating and getting excited about owning people-killing machines turns my stomach, though.  By escalating the issue and pushing it to the extremes, these groups have lost me.  Hunters' and sportsmen's best interests are no longer best served by the majority of pro-gun groups, and we will lose rights we have now if we continue to let groups from the NRA to local dealers push the debate to a fanatical extreme.

Disclaimer:  I'm a charter member at Blackwing Shooting Center, referred to above.  I know their owner, several of the staff, and have a lots of friends that shoot there.  They are good people.  I have shot and will shoot trap and sporting clays there.  Reasonable people can disagree on a single issue without dissolving ties.

Posted by JRC on Friday, May 31, 2013 No comments:
Email ThisBlogThis!Share to TwitterShare to FacebookShare to Pinterest
Tags: Politics, Rant 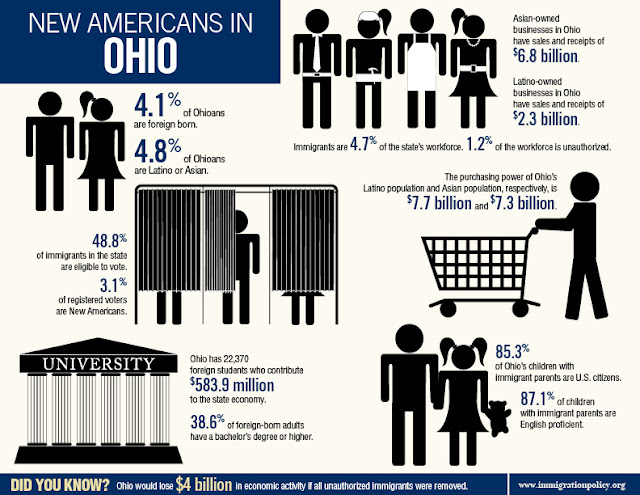 More interesting facts about the immigrant population in the state of Ohio, here:  http://www.immigrationpolicy.org/just-facts/new-americans-ohio
Posted by JRC on Wednesday, May 08, 2013 No comments:
Email ThisBlogThis!Share to TwitterShare to FacebookShare to Pinterest
Tags: Immigration, Marysville, Politics
Newer Posts Older Posts Home
Subscribe to: Posts (Atom)